Adventures on the ocean

Arved Fuchs
A wanderer between the north and south Poles, Arved Fuchs ranks as one of the boldest adventurers in Germany. 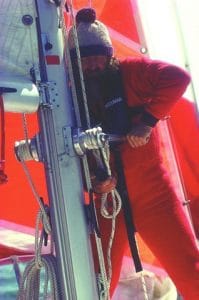 Arved Fuchs
Fuchs has traveled the raging rivers of Labrador in a canoe and has fought his way through the jungles of Borneo. He crossed the Atlantic in a sailing boat and has rounded Cape Horn during winter in a collapsible boat. His “Dagmar Aaen” was the first ship to sail round North and South America in one journey, without the support of an engine. Together with his friend Reinhold Messner, Fuchs explored the Antarctic. During this “Ice-Sail” expedition he covered more than 50,000 nautical miles. For all his daring qualities, Fuchs is, however never rash. Each of his expeditions is prepared entirely in advance. He makes no compromises with regards to his equipment, which is why Fuchs wears SECUMAR lifejackets.

Wilfried Erdmann
When he was only 18, Wilfred Erdmann rode to India on his bicycle. At the age of 25, he sailed around the world in “Kathena,” a boat only seven meters long. It was not to be his last time. His many sea trips made him a role model for long-distance sailors. Erdmann finds more gratification in those challenges that are greater. This may explain why, on a recent adventure, he sailed around the world against the wind. Even Erdmann, however, does not leave anything to chance. For years he has been equipping himself with SECUMAR life-saving equipment.