In April of 1950, an uninvited guest, a person whom most would prefer to see leaving, entered the premises of Firma Ing. Karl Bernhardt Apparatebau. It was tax inspector Carstensen, from the tax office in Hamburg-Neustadt, who had come to carry out a routine government audit. The head of the company, Karl Bernhardt, let out a sigh of relief when the tax auditor submitted his report on the 24th April regarding the company’s first post-war years. In these times, black markets and shady dealings were all too common. In Bernhardt’s company, however, there had been no unexplained increases in earnings. Everything was in order, and accounting records were correct. There was only a marginal note made by the tax official, that “…expenditures slightly exceeded standard costs for such a company, given the current post-war situation.” With understanding, however, he added “….it must be taken into consideration that, currently, the German tax-payer is forced to make many necessary purchases, in order to make up for losses caused by the war.” Such losses were the result of the post-war currency reformation, and material losses from bombing. 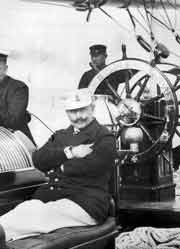 Kaiser Wilhelm II. on board of his yacht “Meteor”. Although a big sailing fan, he is not a good idol, because he never wore a lifejacket.

Tax inspector Carstensen’s notes are more than entertaining anecdotes. Here, small beginnings are documented, which, compared to today’s figures, reflect the constant upswing of the company SECUMAR. The small staff then included only two businessmen, one master craftsman, one apprentice, and four factory workers. Today, there is a workforce of eighty-five people. The earnings of the company have grown substantially as well. The company’s turnover in 1946 was exactly 86.471 Reichsmark. Today, however, the company’s annual turnover is in the double-digit million Euros.

The growth of sailing as a leisure time pursuit contributed to positive development within the company. Until the sixties the sport was pursued by few people. When the sailing and yachting boom set in, Jost Bernhardt was able to offer suitable, comfortable safety with his BS 8 model lifejacket. This piece of equipment, constructed for inland waterway sailing, was originally designed to bring safety to boatmen without hindering their work. Yachtsmen, who required freedom of movement when carrying out various duties on board, were also very pleased with the compact BS 8 design. 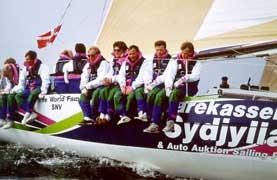 The danish racing yacht “Sydjylland”. The professional crew need not be scared of wind or weather, because they trust in SECUMAR.

This basic BS 8 model was developed further. The chamber volume was increased to ten liters to offer even greater safety reserves. The overall look was also enhanced, as the outer part of the lifejacket was made to look more fashionable. In 1970, the lifejackets were complimented by a safety harness, to which safety lines could be attached. This provided not only safety on board, but could facilitate rescues and recovery during a man-over-board emergency. With these products in its range, SECUMAR consistently built up sales. Sales representatives constantly acquired new buyers. Since then, water sports have played a large role in ensuring that the annual number of lifejackets manufactured by SECUMAR remains in the six figures.

The economic upswing was not the only milestone during the seventies. The company also moved from Hamburg to Wedel, a smaller town outside of Hamburg. The original building in Vorsetzen, a part of Hamburg, in the shadow of the famous St. Michaelis church, offered an ideal site, as it was in close proximity to the port. These premises, however, were constantly threatened by flooding. For example, in the great storm of 1962, high tides caused floods that ruined production rooms in the company. Furthermore, due to existing plans by the city to build a second river Elbe tunnel, it would have been impossible for SECUMAR to build any extensions onto its site. Therefore, Jost Bernhardt looked in new directions, and in 1975 acquired the former premises of a fur trader in Wedel, who had gone bankrupt. The new workplace suited the needs of SECUMAR, however, in order to accommodate further growth, it has expanded even more since the move.