In the late sixties, Jost Bernhardt tested what was then his latest invention, the BS 8, an inconspicuous lifejacket designed for inland waterway sailing. In preparing its introduction to the market, he could not have expected the extent of opportunity, which would be later presented. Success was based primarily on the BS 8’s discreet quality. Everyone from the population of hobby sailors desired comfort and convenience, a quality that a clumsy, obstructive lifejacket could not provide. 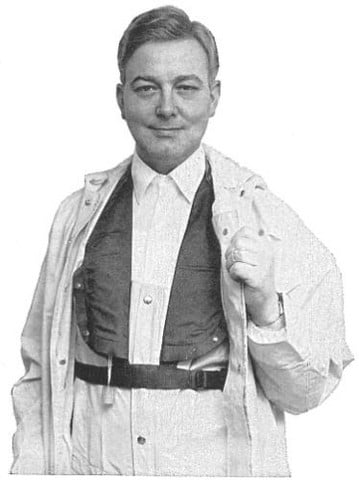 The deflated lifejacket: flat and unobtrusive.

At this point, however, Bernhardt was not thinking of the still relatively small population of hobby skippers. His concern was directed toward those who only took to the water involuntarily, in other words, those who earned their daily wages through hard work as sailors.

The Insurance Association for Domestic Shipping was alarmed by high accident figures and fatalities amongst sailors in inland waters. One reason for these poor statistics was a lack of understanding in lifejacket safety. Most types, until then, were impractical to say the least, often getting in the way while one was working. When the working day was over, seamen never wore a lifejacket on land. The awkwardness of a clumsy lifejacket presented too much room for ridicule. However, misfortune never sleeps, and the consequence was that each year the Insurance Association had an increasing number of widows to look after. 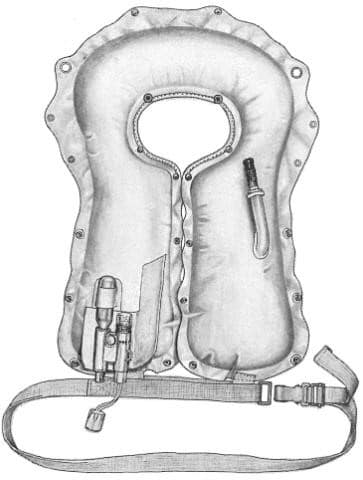 The inflated lifejacket: pure safety around the neck.

This situation prompted Jost Bernhardt to produce the BS 8. An inflatable lifejacket, the heart of its design was the SECUMATIC 8, an automatic inflator. This device was a miracle produced by a team of fine mechanics from the Wedel Precision Engineering Company of Georg Hase & Son. The safety mechanism can best be described by its water-sensitive element. Without water contact, a pill composed from cellulose holds the lever-spring system cocked. Upon contact with water, the water-sensitive pill quickly disintegrates. This prompts the system to discharge a pin, which pierces a carbon dioxide cartridge. The gas in the chamber is then released to inflate a buoyancy chamber.

As long as this pill remains dry, in other words, as long as the wearer of the lifejacket holding the automatic inflator does not fall into water, the buoyancy chamber remains empty and flat. The jacket can then be folded into a small shape. In this deflated condition, it has an olive colored top. However, when the lifejacket is inflated, the olive side folds down and a radiant orange color over takes the jacket.

Thanks to the revolutionary element of the BS 8, a person who is unconscious and falls into the water will not drown.

The buoyancy chamber is inflated upon water contact and turns a person onto his back, in accordance with the laws of flotation physics. Most importantly, the person’s head is above water at all times.

The news of this safety element, coupled with the ease of use and the comfort of wearing a virtually unnoticeable personal flotation device quickly spread. The still small sailing community became enthusiastic about this new offer. The new design provided an alternative to the average bulky life vests. This enthusiasm has not diminished today, even amongst the generations of lifejackets that have followed.