In the days following the 21st of September, 1957, radio broadcasts brought special reports to its listeners. The reason was that all of Germany feared for the lives of the crew of the Pamir, which had sunk off the Azores in a hurricane. One man from Hamburg was following the reports particularly closely. His name was Jost Bernhardt.

Jost Bernhardt, the junior boss of the company Ingenieur Karl Bernhardt Apparatebau began researching the field of lifesaving technology for his company after the war. Initially, in 1951, he dealt with lifejackets out of naval stock. One of his biggest customers was the Danish captain, F. Christensen, who had instructions to outfit his country’s navy with new lifesaving equipment. No more lifejackets from old stock were used, so demand for new products increased. Therefore, the company had to boost production rapidly.

Inspired by the PAMIR tragedy

From the beginning, Jost Bernhardt attached great value to thorough research. He was one of the first people to do so in the area of sea safety. The Pamir tragedy inspired him to research more effectively and strengthened his intentions to produce a quality lifejacket. Bernhardt got hold of all lifesaving equipment as was possible for this purpose. The swimming pools of Altona, in Hamburg, provided the location where much systematic testing could be performed. The results were documented with photographs, and lists of advantages versus disadvantages.

In 1958 and 1959 Bernhardt compiled his findings on the physics of flotation meticulously, and kept a record of them for articles in specialist magazines. The articles “Zur Problematik der Schwimmweste” and “The Man In The Aqueous Element“, provided milestones in the area of water safety. Also, Bernhardt introduced his concept of “unconscious proof.” This described that lifejackets must be constructed in such a way as to be able to turn a person’s body into a safe position when they are incapacitated, i.e. exhausted or even unconscious. Bernhardt’s new idea stressed the importance of safety equipment that would help the user even if they could not help themselves with their own supportive movement. 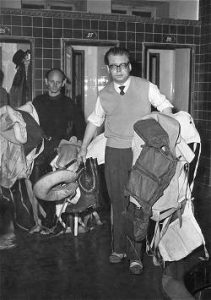 Jost Bernhardt 1959 – Testing all lifejackets available on the market

In the course of this work, he discovered a buoyancy chamber that could be filled with compressed air. This development belonged to a lifejacket from the German navy during the Second World War. From this resulted the first inflatable lifejacket.

The brand SECUMAR was registered

In May of 1961, Jost Bernhardt founded the company Bernhardt Apparatebau GmbH u. Co. At first, as a small enterprise, Ulrich Harms joined as a partner, but left again in 1972. The company was situated in a building on Vorsetzen, in the shadow of Hamburg’s “Michel,” and specialized in the development and production of lifejackets. These were sold under the brand name of SECUMAR, a name derived from the Latin words ‘securitas in mare’, i.e. ‘safety at sea’.

From then, Bernhardt worked continuously to improve his company’s products. This was not possible solely by research of his own. Therefore he sought contact with other experts in order to include their findings. Captain Gerhard Junack, a man who served in the German navy, had been one of the crewmembers of the battleship Bismarck when it sank. As founder and chief of a training group for ship safety in the town of Neustadt, he gave a considerable contribution to the reconstruction and standardization of lifesaving equipment. This later gained him the nickname “father of ship safety“.

The German navy had much confidence in Jost Bernhardt’s products. In 1964, naval troops were equipped with the SECUMAR MRS 3 lifejacket. Along with many others like it, Jost Bernhardt designed this lifejacket. With many ideas patented, SECUMAR products were awarded numerous prizes. Some models, which he helped to design, sold over one million lifejackets.

Jost Bernhardt always wanted to spread his growing knowledge on safety at sea into the public. In an effort to do so, he had films produced, presented information at trade fairs, and held slide shows for sailing clubs. Additionally, Bernhardt spread information to public authorities in congress.

In 1993, at the age of seventy, Jost Bernhardt died. His realm of thought and his maxims are still valid ideas used without limitation. The company, which is now headed by his son Jan-Ulrich Bernhardt and his grandson Benjamin Bernhardt, places great value on its own new research and development. Various SECUMAR innovations, which have since arisen, raised the safety standard considerably, and have acquired general acceptance in the world of sailing.

Thanks to Jost Bernhardt’s close attention to the unfortunate fate of the Pamir, many professional, as well as leisure sailors are still alive today.