Karl Bernhardt had a variety of interests, from music to singing. Bernhardt, who was born in Wiesbaden in 1878, recognized at an early stage that singing was not only his hobby, but could be his career. Before he could take up an artistic career, however, his father insisted that he complete an apprenticeship under him as a plumber. Thus, the young Karl learned such practical things as how to cut, solder, and weld metal. These skills would prove useful in his future. 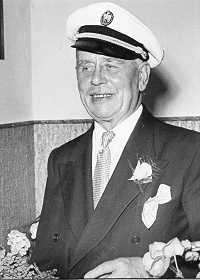 After further studies, Bernhardt’s promising musical career was shortened. Obligations to the army during the First World War forced the young man to leave home and serve as a cavalry lieutenant. After the war, Bernhardt found much happiness in the city of Hamburg and in his re-entry into the civilian world.

Together with a partner, Bernhardt founded the company “Ingenieur Karl Bernhardt Apparatebau.” Soon thereafter, however, Bernhardt worked alone heading the company. The new fledgling company operated in the field of diving equipment. The young entrepreneur’s plumbing skills acquired much earlier were of excellent use to him in this area.

The new company produced diving helmets and equipment, and tailored diving suits. The company produced everything a diver needed for Neptune’s realm, from special underwear to wading trousers, and manometers to lead shoes. Furthermore, Karl Bernhardt borrowed the trident symbol, from the God of the sea, Neptune, for the company logo. 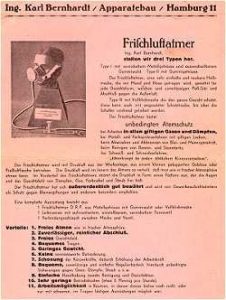 Good air, however, wasn’t only needed under water, but often on land as well. This was the case in the shipyards in the port of Hamburg. Poisonous gases arose while paint was
burning, and during welding processes when ships were being dismantled. These vapors were very damaging to the respiratory organs. Karl Bernhardt recognized this, and attempted to solve these problems in the equipment he manufactured. Soon thereafter, a staff of eight men manufactured a fresh-air breathing apparatus.

Like the rest of Europe, the company suffered the effects of the Second World War. In July of 1943, the company’s headquarters in Admiralitaetsstrasse were bombed. After a total loss, Karl Bernhardt found a new location in Johannisbollwerk, which is where he recommenced the manufacturing of his pre-war products. At this point, Jost Bernhardt, the son of the company’s founder, joined the team.

As Karl Bernhardt gradually withdrew from the company, Jost Bernhardt took on more responsibilities. By Karl Bernhardt’s death in 1960, his son had taken on full management of the company. Around the same time, another company, named Draeger, Luebeck, was taken on as a partner. This company’s products were also in the field of breathing apparati and diving equipment. Eventually the new partnership’s name became “Ing. Karl Bernhardt Apparatebau“.

In the years that followed, Jost Bernhardt discovered a new and promising operational field in emergency sea rescue equipment. More precisely, the company developed its production of lifejackets.