Choosing the right lifejacket for children

Which lifejacket is the best for my child? What do I have to consider? Aren’t inherent lifejackets for children sufficient? At least these are free of service, can hardly be damaged when children are playing and are also less expensive than inflatable lifejackets.

For choosing the right lifejacket you should know some basic information on the behaviour of children in water and their anatomy, which we would like to explain: 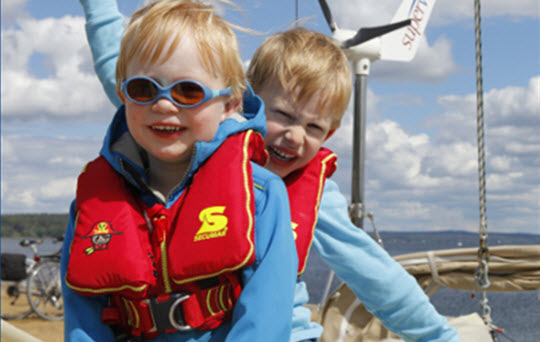 The first challenge results in the fact that children never act the same in water. If they are, for example, not used to water, they might cramp and even remain in water with their face downwards. Unfortunately, it does not only depend on children be used to water. The smaller a child is, the more a tendency to crawl applies, as children are curious to see where they are. Therefore, they turn on their belly. Thus, they work against the buoyancy in their lifejacket though of course they don’t do it consciously. If the children were unconscious, they would turn on their back. This scenario can only be tested in a laboratory with dummies (1). Water tests with children can hardly be simulated.

Infants additionally have an unfavorable anatomy affecting their water physical properties. Infants have a disproportionally big head which moves their centre of gravity further up, also affecting the buoyancy. This is a disadvantage for lifejackets, as their turning movement is affected unfavorably. Ultimately the highest part, which is the head with its respiratory organs, needs to remain over the water surface.

Furthermore, infants have disproportionally high adipose and “light bones” (2), which partially creates buoyancy in arms and legs. This is also a disadvantage for the turning moment of the lifejackets, as this requires a higher force to turn the children on their back.

Finally, infants often still wear nappies, which also causes buoyancy at the wrong part of the body and affect the turning moment of the lifejacket.

To bear in mind for inherent lifejackets for infants: They only offer limited performance. Important is that the children do not drown and remain visible at the surface. The recovery needs to be done as soon as possible. Anyway, infants wearing an inherent lifejacket are safer than those wearing none.

Finally, there is the argument that inherent lifejackets are more robust. Many parents see this as the final criterion for their children. Here we can retort, that our inflatable lifejacket SECUMAR Mini is fitted with an especially robust buoyancy chamber with  DUO PROTECT–

technology, having self-healing properties. However, the Mini is still due for regular service, as also the inflation device and gaskets need to be checked regularly due to the fact that they are subject to ageing even if not worn.

The performance of inflatable lifejackets is superior to that of inherent products by far. On the other hand, there are higher cost for procurement and maintenance. Apart from that the inflatable products activates with each fall into water. This might make them second choice for bathing, at the beach or in a rubber boat. Offshore, children should always wear an inflatable lifejacket. Especially as all children lifejackets have an integrated harness which allows to secure children with a lifeline at an attachment point, e.g. in the cockpit. Thus falling overboard can be prevented a priori.

No matter which kind of lifejacket parents choose – they need to accept compromises between performance and practical points unless they decide to buy both variants.

Of course, it is understood, that responsible parents always stay near their children.

[1] Even if our employees offer to test with their children, we do of course never test with unconscious children! For these scenarios we work with our Dummy  B.A.M.B.I..

[2] Infants compared to adults have much more cartilage in their body. This is the result of the so-called growth zones in bones during the growing process. Thus, the bones of children in younger years are less compressed, which leads to a higher flexibility. The low density, however, implicates that children bones have less drift than those of adults.